In 1912, Alfred de Quervain trekked across Greenland. The data collected by the Swiss explorer on the seven-week expedition are still of great value for science today. The exhibition examines de Quervain’s pioneering feat in the eternal ice, and links it with the present. Switzerland still carries out glacier research in Greenland, making a significant contribution to one of the most crucial issues of our time: global warming.

We offer various guided tours of the exhibition for companies, institutions, associations or private groups.
Please contact us for further advice.

Guided tour of the exhibition "Greenland 1912". 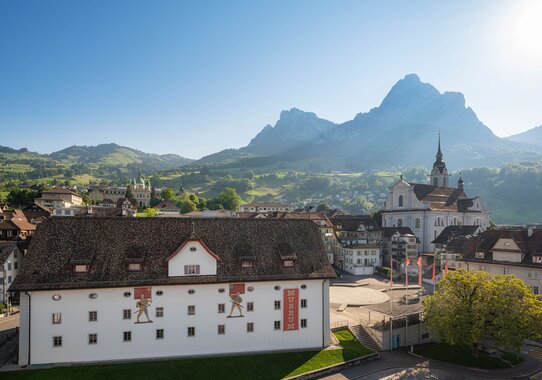 Guided tours in English can be arranged upon request. Guided tours are free of charge for school classes from Switzerland. Please book your visit with the Visitor Service, on Tuesdays, Wednesdays or Fridays from 8.30 to 11.30 am.

For guided tours and indipendents visits for school groups, please contact us 14 days in advance.

Entrance and guided tours are free of charges for Swiss school classes.

To the registration form

Alfred de Quervain was one of the world’s first climatologists. The data he gathered during his expedition to Greenland in 1912 remains of significant scientific value to this day. First shown at the Landesmuseum Zürich, the exhibition ‘Greenland 1912’ will now be presented at the Forum Schweizer Geschichte Schwyz from 12.11.2022 to 12.3.2023. The exhibition follows in the footsteps of Quervain’s pioneering trek across the eternal ice and explores links between that exploit and the present. Switzerland continues to be engaged in glacier research in Greenland and thereby makes an important contribution to addressing global warming, one of the most critical issues of our time.

Since this summer, the impact of global warming and retreating glaciers has preoccupied science and humanity more than ever. The retreat of the ice giants continues, with no end in sight. Climate researchers were already looking into the issue of glaciers 100 years ago, but from a different angle. In the 19th century, people were worried that another ice age was on the way.

Expedition sparks ‘polar fever’
In 1912, everyone was talking about Alfred de Quervain’s ‘Swiss Greenland Expedition’. It wasn’t just that the field of climate research, then still in its infancy, was interested in the data collected by the Bern geophysicist; society was also hungry for tales of adventure from the North. Since the government didn’t want to contribute to the costs of the expedition, the explorer signed an agreement with the Neue Zürcher Zeitung. The newspaper paid one-third of the expenses, securing in return the rights to report exclusively on the expedition. The articles made de Quervain’s adventurous undertaking even more famous, and unleashed a veritable ‘polar boom’ in Switzerland.

Traversing the Greenland ice sheet
Alfred de Quervain had already ventured into the eternal ice of Greenland in 1909. He returned there three years later, aiming to cross the island. Only one person, Fridtjof Nansen, had managed that feat before him. And as befits an adventurer, the Swiss explorer’s route had to be longer and tougher than that of the Norwegian, who had crossed Greenland at a point further south in 1888. And it was! On skis and dog sleds, de Quervain and his companions covered around 650 kilometres in six weeks. It was not just exhausting, but sometimes dangerous as well. Towards the end of the crossing, for example, they only just managed to find the cache of food supplies in time. They were often driven to the limit of their endurance, and towards the end of the journey had to shoot nearly all 29 of the dogs they had with them. That was particularly distressing as the animals had served them faithfully during the expedition.

Climate insights from the eternal ice
The meteorological and glaciological data that Alfred de Quervain and his team collected in 1912 were of enormous value to science. These data are still used for research today – for example, research into Greenland’s ice sheet, which is the Earth’s second-largest fresh water supply. As a result of global warming, the Greenland ice sheet has been melting more and more rapidly over the past two decades. One big problem with this is that the meltwater is no longer being re-absorbed and turning to ice again; instead, all this melted water flows into the ocean. As a result, fresh water reserves are dwindling and sea levels are rising continuously. Incidentally, it was Swiss researchers who recognized this development in 2016.

Global warming: a visit to a glacier in 3D
Using original objects and historical photographs, the exhibition sheds light on Alfred de Quervain’s expedition into the eternal ice and draws links to current research on climate and glaciers. Wearing a 3D headset, the visitors set off on the ‘Expedition 2 Grad’ (Expedition 2 Degrees). In the virtual world around the Great Aletsch Glacier, they witness the effects of rising temperatures in the Alpine environment – and, seeing the changes at an accelerated pace and directly before their very eyes, experience an emotional response.

The exhibition is accompanied by an extensive supporting programme aimed at providing in-depth insights into Greenland and polar research. The programme includes workshops for families run by Swiss Polar Class; tours by historians, polar guides and glaciologists; a ‘Husky Weekend’ on the Hofmatt run by Erlebniswelt Muotathal; as well as a variety of on-site and virtual guided tours.

* Expedition 2 Grad is a research and communication project of the Universities of Fribourg and Zurich, the Knowledge Visualization department of the Zurich University of the Arts and was supported by SNF Agora and other partners.